(Tea Party 247) – Nothing seems to make any sense in America anymore. Apparently in 21st enlightened America, an illegal alien’s supposed “right” to be in the United States is more important than bringing dangerous and violent illegal alien criminals to justice.

Two illegal aliens are “on the loose” after police in New York and New Jersey decided to adhere to sanctuary city policies over national security and public safety policies.

Two illegal aliens accused of child sex crimes are on the loose in the Tri-State Area after local authorities failed to honor ICE detainer requests.

In line with their Sanctuary City policies, police refused to honor federal detention requests and released the suspects, despite them being listed on ICE’s most wanted list.

ICE is now asking for the public’s help to get the two Mexican nationals back behind bars.

One illegal, Luciano Trejo-Dominguez, is wanted for a litany of crimes, including aggravated sexual assault, sexual assault (victim 13-15 years old), criminal restraint, criminal sexual contact and endangering the welfare of a child. Despite this, he was released from the Cumberland County Jail in New Jersey on August 23 and “remains at-large.” 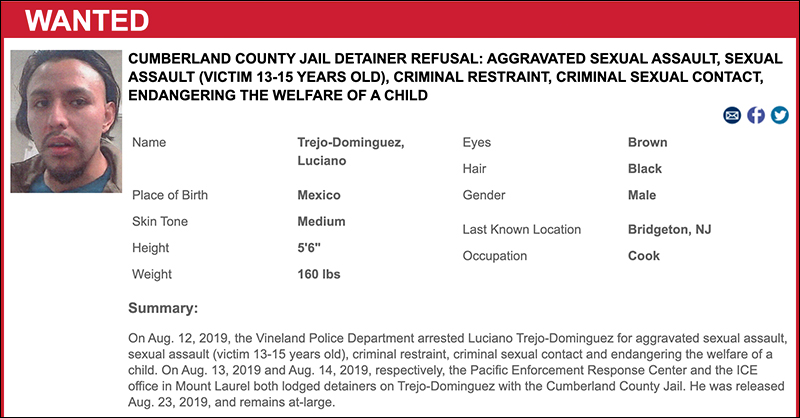 The other man, Joaquin Rodriguez Quiroz, is also wanted for child sex crimes, described by ICE as 3rd degree rape, involving a victim less than 17 years old. The Westchester County Jail in New York released him on Sept. 7, despite ICE lodging a detainer request. 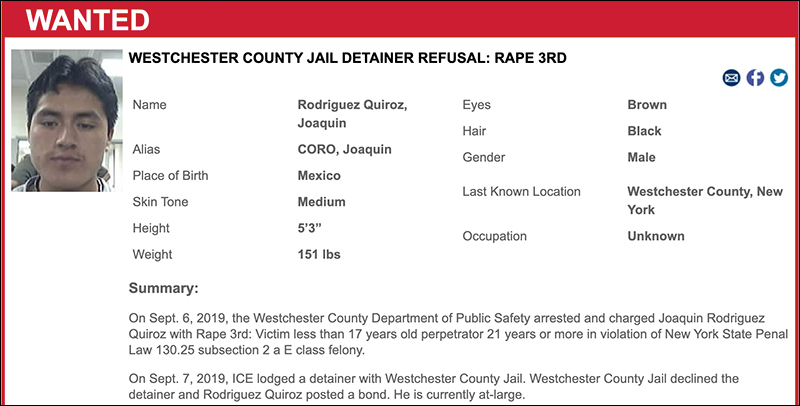 “ICE has classified both men as fugitives and are asking anyone with information on where either of the child rape suspects are to call 1-866-DHS-2-ICE,” reports CBS New York.

This is utter insanity. These police officers are throwing all reason and common sense right out the window for the sake of being politically correct. Perhaps their hands are tied but two seriously violent illegal aliens are now roaming the streets freely, able to find their next victim, all because of liberal policies protecting them and their supposed rights.

This is where we’re at in America, folks. If American citizens had gone out and committed these atrocious crimes they would have been shut up in a prison cell until their day in court. Two illegal aliens violently rape and abuse minors and they are free to go because… tolerance, acceptance, love. It’s mind-boggling.

ICE said on Thursday that they have caught 54 criminal illegal aliens in New Jersey alone “after conducting a statewide sweep going after illegals who had been released by local authorities.” It’s totally mind-blowing to think police officers are actually apprehending criminals and then releasing them based on their citizenship status. It defies all logic and rationality.

Thank goodness for the good men and women at ICE who are trying to combat this insane problem. Acting Director of ICE, Matthew Albence said in a statement Thursday, “As law enforcement professionals, it is frustrating to see senseless acts of violence and other criminal activity happen in our communities, knowing ICE could have prevented them with just a little cooperation,” he said. “To the public, who want to live and raise your families in safe neighborhoods, we ask you to hold your lawmakers accountable before you, or someone you love, is unnecessarily victimized by a criminal ICE could have removed from the country.”

What a sad state of affairs. ICE is working diligently to remove criminals from our streets and local and state law enforcement agencies should be working with them not with ignorant, self-serving politicians.

Tragic: Convicted Rapist Released From Jail Because Of COVID Concerns, Now Look Where His Victim Is…

Seniors who live in qualified zip codes across the country are slashing their monthly electric bill by taking advantage of these special programs and going solar. With new tax credits and state incentive rebate programs available, you can upgrade to solar for $0 down and no out of pocket expenses. This makes going solar a.....

Slash Your Electric Bill With This Program

Experts Were Wrong About Cellulite Female Body Sculpting Expert, Joey Atlas is saving women from the pain, frustration and losses of thousands of dollars in wasted treatments. Ask any woman on the street what the definition of “cellulite” is and you’ll get a confused variety of answers. From “toxic fat pockets caught in the skin”.....

The Truth About Cellulite

If you’ve ever asked yourself; “Why did I say yes to that?” in disbelief, you may have become a victim of what is now known by experts as “Conversational Hypnosis.” At one time, these techniques were taught only to licensed practitioners; however, now it seems anyone can get their hands on these powerful techniques and use.....